Fray cannot be expected to remember everything that hops and skips through his mind. Nevertheless, etched images are never swept away. For there was a time the smell of burning human flesh twanged his nerves and trembled his knees; a time when the family cried Jesus Please. Fray was three years old.

Fray and Momma Willa lived in three rooms on the floor above a saloon that never closed, day, night nor holiday. Willa worked in the Corona Cigar factory. She made twelve dollars a week rolling tobacco into leafy brown tubes. Fray hadn’t met his daddy Fred Futon, not yet; when Fray was born, daddy Futon was fighting a war overseas. On the morning daddy returned, Momma Willa and Grand’ma Marie stood on the balcony to see daddy walkin’ up the street.  Fray crammed between their knees decided to climb the veranda to get a better look, accidentally he fell over the rail down to the ground and on the way down everything in the world disappeared.  Fray didn’t feel anything but a splat. When he finally opened his eyes, he saw Marie and an oddly big man holding Momma Willa’s hand.  He’s aw’right, said the man. Git me some Ex-lax said Marie. In those days Ex-Lax was a stimulant that made the bowels move, it  cured everything, even falls off a balcony.

Age 4:  Momma Willa and Fred spent a lot of time together, most often forgetting Fray was in the room. But one night, daddy didn’t come home, a different man was sleeping over. Say hello to Uncle Teddy, Willa said. You got a pretty boy, Ted said.   In the morning Frazier’s pajama bottoms were missing. Every night after that whenever Uncle Teddy slept over Frazier had dreams of children chained to a tree. What is – is what is.

When Fray was age six he learned the meaning of his name meant trouble; Momma said, It’s what men do when they go to war.   Fray scratched his head. Needing time to understand the importance of his name, he wandered down to the Mississippi River by himself to watch levy-people building shacks out of cardboard boxes and sheets of tin. He asked, Can I live here too? A bushy bearded man said yoo’s too young, if’n storms come, this here shack gonna crumble, wha’cha gonna do then? The man Looked Fray up and down, Yoo’ a pur’ty boy, come inside. Fray said NO and held his ground. The bushy bearded man waved a crooked finger, Git outta’ here! Yoo’ go back whar’yoo cum’frum!

Age Seven: Fray did well in grade school, teachers said he was precocious, the smartest boy in class. Smart enough to know something about himself embarrassed Willa.  More often than not she would say, Yoo’ got bad posture Fray. Why don’cha stand up straight? You hear me pretty boy?  Willa slapped him between his shoulders, then slapped again.

One day standing alone in the school yard, Fray thought he heard God say, No grave gonna’ hold your body down, thar’ ain’t NO TROUBLE in the holy water.  Fray repeated what he heard to himself, repeated it all day long like a song.

Some days later he was dragging his bare feet along the beach of Ponchartrain’s Amusement Park; suddenly Fray’s attention was drawn to the top of the Ferris wheel. Way up, standing on the tip top he saw Jesus wave hello.  Fray waved back. Jesus smiled.  Apparition was not in Fray’s vocabulary, no need, because ghosts are ghosts and he knew the word ghost. As soon as the apparition disappeared, Fray grabbed a fist full of sand, spread his fingers slightly apart; slowly the sand dribbled back to the beach. He looked at his empty hand and  thought today is the best day of my life. 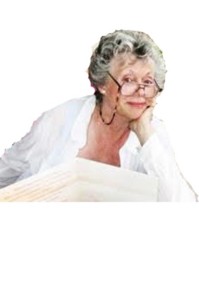 Sydney is a grandmother, a house builder, a story writer and artist, who works in a small village of Ajijic. Mexico. For many years Sydney  provides programs for local villagers, her  art work that can be seen in museums and medical therapy